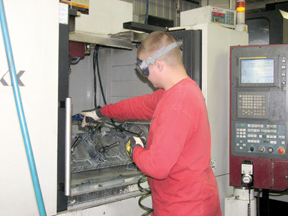 CEDARVILLE — Fermer Precision may be a small business in the hamlet of Cedarville, but the company has kicked off 2012 off in a big way with new equipment, new customers, and new affiliations with sister companies it gained when Fiber Instrument Sales (FIS) acquired Fermer in July 2011.

In January, Fermer landed a contract with Wisconsin–based J.L. French, Inc. to produce multiple prototypes of a newly developed automotive component. The company began machining the components, which use high-pressure, aluminum die-casting technologies developed by J.L. French for its automotive, marine, lawn and garden, and industrial markets.

Manufacturing is, in fact, seeing a boom recently as more work is coming back to American soil after years of being outsourced to Asia and Mexico, he says. Where it was once very inexpensive to farm work out overseas, quality issues and the rising cost of fuel have caused some companies to reconsider and turn to American manufacturers instead, he says. Over the past four months, Fermer has grown from 49 to 60 employees due to increased work demand. “We are continually looking at growth,” Cushman says.

Couple that with changing technology and the market contraction the industry saw in 2009 and 2010 during the recession, and Fermer had a real opportunity for growth if it could distinguish itself from the competition, Cushman says.

The computer numerical control (CNC) machining company did that by further honing its expertise in its core markets of automotive (including power transmissions and emissions controls), firearms, commercial air compressors, and residential and commercial water pumps.

“We have developed specific competencies on machining castings,” Cushman says. Specifically, the company has become known for its ability to take hard-to-hold, unbalanced, or otherwise difficult-to-machine parts and has figured out ways to turn those rough parts into precision pieces for customers, he says.

Fermer has also been working to develop additional competencies to offer customers, such as leak testing, that add value to the product, he says.

“They’re looking for someone who can do more than just machining,” Cushman says of customers. Being able to offer those extra services has helped set the foundation for the growth he expects Fermer to see this year.

Fermer Precision generates annual revenue of about $20 million, and Cushman hopes to grow that by between 15 percent and 18 percent this year.

Fermer will also benefit this year and in future years from its new parent company FIS, Cushman says. When the Oriskany–based business acquired Fermer last year (terms of that deal were not disclosed), it placed Fermer firmly within FIS’s family of companies.

“We have that synergy,” Cushman says of all the businesses. FIS’s companies include Fiber Instrument Sales, Inc., which specializes in fiber optics; The Light Connection, which focuses on plastic extrusion; Molding Solutions, Inc. (MSi), which specializes in injection molding; FIS Blue, which focuses on broadcast and military cables; and Fermer, a CNC machining specialist.

Working with those sister companies is already paying off, Cushman says, as Fermer and MSi are already collaborating on a project that requires precision machining and over-molding.

The group of FSI companies jointly marketed their combined services as firearm-component manufacturing specialists at the 2012 Shooting, Hunting and Outdoor Trade (SHOT) Show in January in Las Vegas. “It was very, very well received,” Cushman says of the marketing effort.

The FIS group of companies has annual sales exceeding $65 million, employs more than 350 people, and exports products to more than 110 companies.