California firm to close on InfiMed acquisition in April 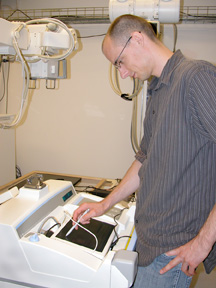 Varian (NYSE: VAR) agreed to purchase privately owned InfiMed for $15 million, plus payments based on the sales of InfiMed products over the next two years. The transaction will include InfiMed’s headquarters at 121 Metropolitan Park Drive in Salina.

Varian manufactures medical devices and software for treating cancer and other medical conditions with radiotherapy, radiosurgery, and brachytherapy. It supplies tubes and digital detectors for medical, scientific, and industrial X-ray imaging.

InfiMed will be integrated into Varian’s X-Ray Products division, according to Robert Kluge, Varian’s president for that division. Varian will then be able to provide its customers with a more complete product line, he says.

“It’s a fit for our business,” Kluge says. “If you take our imaging receptors and add them to InfiMed’s processing capability, it’s a more capable product. It’s one that we can package together.”

Integrating different components in imaging systems can be a challenge, according to Kluge. Varian’s customers often ask for integration help, and the company decided it wanted to offer imaging receptors and processing as a package.

“[InfiMed] knew that these components were coming together,” Kluge says.

Varian does not plan to close InfiMed’s headquarters in Salina or a satellite office it operates outside of Rochester, according to Kluge. No layoffs are planned, he adds. InfiMed employs about 60 people.

“We think that the business will probably expand significantly for them over the next three years as a result of this [acquisition],” Kluge says. “The X-Ray Products business has grown 15 percent or so over the last five years. I think they’ll be on the higher end of that.”

Varian’s X-Ray Products division totaled $469 million in revenue in its 2011 fiscal year, while the entire company generated nearly $2.6 billion in revenue that year, according to its annual report. Varian’s net income totaled almost $400 million in the period.

Growth at Varian does not typically come from acquisitions, Kluge says.

“We have mostly organic growth,” he says. “Most of our acquisitions are small, and we don’t really make that many. We’ve only made three or four over the last fifteen years or so.”

Varian will likely use the InfiMed name on some products, which will take advantage of existing brand equity, according to Kluge. He anticipates keeping current InfiMed President Amy Ryan to run the company’s operations in Salina.

“This is an exciting development for our business and our employees,” Ryan said in a news release. “By joining with Varian, we will be able to offer our leading technology in digital-image processing to more customers around the world.”

Ryan declined a request for further comment and referred questions to Varian.

Varian employs about 5,900 people at manufacturing sites in America, Europe, and China. Its X-Ray Products division has roughly 800 employees.

The California company did not use any outside brokers or accountants in the deal to acquire InfiMed, according to Franco Palomba, Varian’s corporate senior vice president for finance and business development and the company’s corporate treasurer.

InfiMed’s headquarters on Metropolitan Park Drive is 27,000 square feet, according to records from the Onondaga County Office of Real Property Tax Services. The facility and the land it sits on were assessed at just under $1.3 million in 2011, the records state.