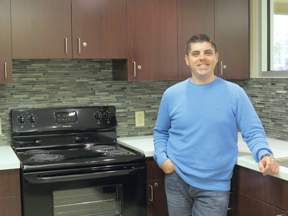 The program, which has 18 students enrolled, started May 6, says John Patro, OTA program director at the Syracuse campus. The 18 students represent the maximum enrollment that the school had set, he adds.

Patro spoke with CNYBJ on May 14. He began working with Bryant & Stratton College last July.

The students are working toward earning their degrees in December 2016.

The next cohort for the OTA program will start in September. The school won’t accept another cohort until after its accreditation for the program is finished in August 2016.

“All 18 students follow the same course sequence. There’s no deviation from that,” Patro says in defining the term “cohort.”

Students will work to earn an associate of applied science degree as an occupational-therapy assistant.

The OTA program continues for five academic terms, or the equivalent of 20 months, says Patro. Bryant & Stratton operates on trimesters, he added. A single term continues for 15 weeks.

The program’s fifth and final term involves full-time fieldwork, providing students the hands-on skills and education that will help them secure licensure and immediately join the workforce.

“It’s two eight-week internships, and that’s a requirement of our creditor,” says Patro.

Bryant & Stratton had conducted research to identify professional needs in the areas where it operates campuses.

The research, Patro says, indicated the Syracuse area has a need for occupational-therapy assistants.

The school couldn’t find any colleges or universities along the New York State Thruway corridor between Albany and Buffalo that had an OTA program, he adds.

“We are the only program that exists in that stretch of the Thruway, so clearly Central New York is missing out on an area that’s highly needed,” Patro contends.

In a Jan. 27 news release, first announcing the program, the school cited figures from the U.S. Department of Labor’s Bureau of Labor Statistics that indicate demand for certified OTAs is expected to jump 41 percent nationally by 2022.

Bryant & Stratton College’s OTA program offers a “functional” degree that graduates can use in traditional and non-traditional settings. The degree also serves needs across a wide continuum of care, including autism, geriatric, veteran care, hospice and palliative care, the school says.

“At that point, we became eligible to recruit for the program,” says Patro.

Bryant & Stratton in August will submit a “self study” in which it explains how it will meet all the standards for such a program. Approval for candidacy status only required details on meeting a certain number of standards.

Once ACOTE reviews the study, it will make an on-site visit in April 2016 for a “thorough” review of the program and facilities.

Once Bryant & Stratton obtains accreditation for the program, its graduates will be eligible to take the national certification examination to become an occupational-therapy assistant, which the National Board for Certification in Occupational Therapy (NBCOT) administers.

“In order for a student to sit for their certification exam, which they do need to obtain licensure in each state, the student must have graduated from an accredited program,” notes Patro.

After successfully completing the exam, the individual will be a certified occupational therapy assistant (gaining the COTA professional designation), he adds.

In addition, most states require licensure in order to practice; however, state licenses are usually based on the results of the NBCOT certification examination, according to Bryant & Stratton.

Patro began his career as a staff clinician working in geriatric care. He earned his clinical doctorate from Chatham University, and went on to become assistant professor and academic fieldwork coordinator at Temple University.

Patro is also serving as the central-district representative for the New York State Occupational Therapy Association board. Patro says he is excited to bring his expertise to the college as it begins its program in Syracuse, an area that had been lacking a formal OTA program.