Still, manufacturers expect conditions to be better later this year 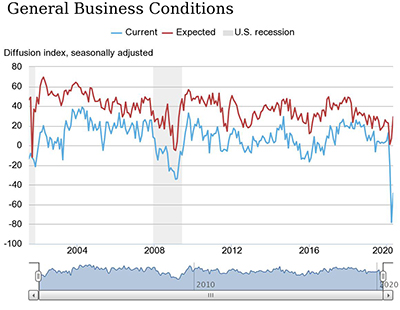 A monthly gauge of New York manufacturing activity indicated the industry continues dealing with “significant declines” in orders and shipments as the coronavirus pandemic carries on.

The Empire State Manufacturing Survey general business-conditions index rose almost 30 points to -48.5 in May from its worst-ever reading of -78.2 in April.

Still, the May result, based on firms responding to the survey, indicates “business activity continued to deteriorate significantly in New York,” the Federal Reserve Bank of New York said in the report issued May 15.

A negative reading on the index indicates a decline in the sector, while a positive index number points to expansion or growth in manufacturing activity.

After plunging in April, the index for number of employees increased nearly 50 points to -6.1, suggesting that after declining sharply last month, employment levels “fell somewhat further” in May, the New York Fed said.

The average-workweek index, measured at -21.6, pointed to ongoing declines in hours worked, despite not being as negative as the April reading.

Price indexes were little changed from last month. At 4.1, the prices-paid index indicated “modest” selling-price increases, while the prices-received index stood at -7.4, pointing to a second consecutive monthly decline in selling prices.

The capital-expenditures and technology-spending indexes both remained below zero, a sign that firms “planned to reduce both kinds of spending,” the New York Fed said.