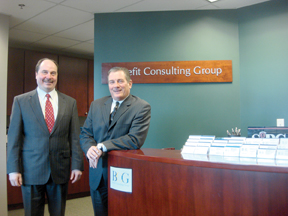 CLAY — The leaders of a pair of local financial-services companies believe their firms will continue a recent hot streak of adding employees and growing revenue in 2012.

Benefit Consulting Group (BCG) and its sister company, Bailey, Haskell & LaLonde (BHL), have collectively been adding between five and 10 employees every year for five consecutive years, according to John Catanzarita, president of BCG. He anticipates that rate of hiring will continue this year.

BCG is an employee-benefits consulting and retirement-plan administration firm. BHL is an insurance and financial-services firm. The two companies have a third sister company, Workplace Health Solutions (WHS), which specializes in medical services designed to prevent or minimize work-related injuries.

All three companies are subsidiaries of Oneida–based Oneida Financial Corp. (NASDAQ: ONFC), but are headquartered at 5232 Witz Drive in Clay. BCG has 40 employees in the 18,000-square-foot headquarters building, BHL has 42 workers, and WHS has four.

The three businesses are technically separate firms that Oneida Financial Corp. added to its portfolio at different times. The banking company acquired BHL in 2000 and BCG in 2006. Then it started WHS in 2008.

WHS operates using a physician network that is predominantly in New York State, while BCG and BHL have a larger reach. In addition to their Clay headquarters, BCG and BHL operate satellite offices in Buffalo, Cazenovia, Chittenango, Long Island, New Hartford, Oneida, Rome, and South Carolina. Together, they employ about 140 people and work with between 13,000 and 18,000 clients.

The firms work together closely to give clients access to their full range of services, according to Catanzarita.

“Although we’re separate subsidiaries under Oneida Financial Corp., each day we’re operating more and more as one company,” he says.

Still, BCG acts as an independent consultant on employee benefits, according to Catanzarita. It advises on issues ranging from financial planning to health insurance for businesses and individuals.

“If you were to have a financial plan and you have investment people or life-insurance people you use, we’re not sitting here telling you to have us do it for you,” he says. “We say, ‘Here’s your financial plan. Now make them do this, don’t let them sell you something else.’”

Interested companies can use BHL for their insurance products. BHL deals in a range of insurance, from automobile insurance to workers’-compensation insurance, for individuals and businesses.

“It could be self insurance, it could be alternative, it could be high deductibles, or it could be what people traditionally refer to as insurance,” says Pierre Morrisseau, BHL president. “And we actually have expertise in all of those arenas.”

Working with either BCG or BHL gives customers access to knowledge from both companies, Morrisseau says.

“It doesn’t matter whether you do business with John or with me, or anyone else in the building, you immediately have a team of people,” he says.

Future growth will likely come in Long Island, New York City, and Charlotte, N.C., according to Morrisseau. BHL is also developing a workers’-compensation captive insurance program that will likely be popular in Pennsylvania, Massachusetts, and Vermont, so expansion may come in those states as well, he says. Captive insurance is organized by a parent company to cover the risks of that parent company.

BCG and BHL adapt as clients come to them with new needs, Catanzarita says.

“As things evolve and as new types of challenges come up, there’s going to be niches out there,” he says. “We don’t rush to do things. We do them in the right, methodical manner. Our philosophy is singles and doubles. These days it will get you in the hall of fame more than home runs.”