DeWITT, N.Y. — A federal appeals court has ruled in favor of a DeWitt business in a $61 million patent-infringement case over coaxial-cable connector technology.

Corning Optical is a subsidiary of Corning Inc. (NYSE: GLW), a company that is headquartered in Corning in Steuben County. 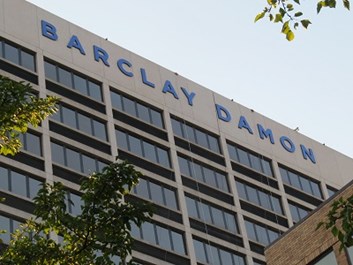 In its release, Barclay Damon cited information from an article on the website Law360.com. The article indicated that the appeals court rejected Corning’s claims that the district court made a “cavalcade of errors” in understanding patent language, and that its products did not infringe on any of PPC’s designs “under the correct interpretation.”

Law360 is a subscription-based, legal-news service operated by the Portfolio Media company, a subsidiary of LexisNexis.

“We couldn’t be more thrilled at the outcome,” Douglas Nash, Barclay Damon attorney who represents PPC, said about the case. “We believe this case is a strong reminder to competitors to uphold their integrity and think twice about violating patent protections in the future.”

Corning issued the following statement in response to a BJNN inquiry.

“Corning respectfully disagrees with and is disappointed by the court’s determination in this case. The company intends to seek all available appellate remedies,” the company said.

The federal suit was the second that PPC Broadband brought against Corning, according to the Law360.com article.

The firm in 2011 alleged that the Corning subsidiary had “secretly reverted back” to the dual-patent infringing versions after the company initially changed its product designs following a 2003 settlement agreement, the article said.

U.S. District Judge Gary Sharpe originally awarded PPC nearly $24 million in royalties after a three-day trial in 2015, the Law360.com article noted. But Sharpe later doubled the damages in November 2016, noting that the monetary adjustment was “largely justified” due to Corning’s concealment of its “egregious infringement behavior.”

Corning argued that there was “no legitimate cause” for increasing the award, but PPC countered that Corning had been caught infringing twice and the court “did not abuse its discretion in enhancing damages,” Law360.com reported.