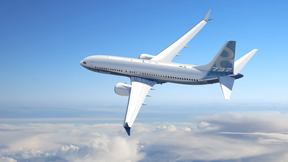 The Endicott location of BAE Systems, a global-defense contractor, will develop the spoiler-control electronics that the company’s Fort Wayne, Ind. facility will manufacture, BAE said.

Neither side is disclosing terms of the contract, including its length or dollar amount, says Martin Leab, program manager of spoiler-control electronics in BAE’s Endicott office.

“They’re [Boeing] in a very cost-competitive environment against Airbus, so they have asked us not to disclose the value of the program,” Leab explains.

Airbus is part of the European Aeronautic Defence and Space Company N.V. (EADS), according to the Airbus website.

Delivery of the 737 MAX is planned for 2017, and customers have placed more than 1,300 orders for the airplane, BAE stated.

“One of our units will be on each one of those planes,” says Shelby Cohen, communications manager for BAE Systems.

A spoiler is “a control surface on the wing of an airplane, and on the 737, the legacy airplane, that spoiler-control system is basically controlled mechanically,” Leab says.

As it works to improve the performance of the 737 MAX, Boeing wants to enhance the spoiler system, which is a different control mechanism, Leab says. BAE specializes in that type of improvement work, he adds.

“So it was a natural fit for that effort as Boeing wants to control those surfaces to enhance the aircraft performance,” he says.

About one-third of the work in BAE’s Endicott location focuses on commercial aircraft. The location employs a total of about 1,300, according to Cohen.

“It’s a joint development spearheaded out of our Endicott facility but it will include our Fort Wayne [personnel],” Leab says.

BAE will work with a team from Boeing on a control box, which is very similar to other flight-control boxes that will have electronics in them and control logs, explained Leab.

Work started on the contract on July 1, he says.

BAE believes it won the Boeing contract for this work based on its ability to provide a system demonstrating “technical readiness and reduced-development risk” for the Boeing 737 MAX, the company said in a news release.

The 737 MAX is a new-engine variant of the airplane and builds on the “strengths” of the Next-Generation 737 with advances in fuel-efficiency and environmental performance, BAE said.

Equipped with the new LEAP-1B engines from Cincinnati, Ohio–based CFM International, Inc. and improvements such as the advanced-technology winglet, the 737 MAX reduces fuel burn and carbon-dioxide emissions by 13 percent, according to BAE.

BAE Systems provides a range of products on Boeing airplanes, and the history of their relationship dates back six decades, the company said.

Headquartered in Chicago, Boeing manufactures the Boeing 737, a commercial jet with more than 10,000 orders to date, according to BAE.

Boeing forecasts global demand for more than 23,000 airplanes in the 737’s market segment over the next 20 years at a value of nearly $2 trillion, BAE said.

BAE Systems, Inc., the firm’s U.S. arm, is a wholly owned subsidiary headquartered in Arlington, Va., according to Cohen.

Even though the parent company is publicly traded, BAE Systems, Inc. is privately held and a 2012 revenue figure was not available, Cohen said.