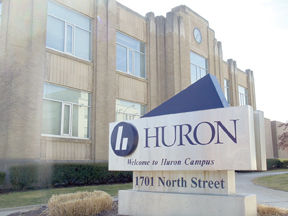 ENDICOTT — BAE Systems, displaced last fall by severe flooding at its Johnson City location, won’t have far to go to move into its new permanent home.

That’s because the company recently signed a five-year lease to stay at the Huron Campus in Endicott, where BAE has been operating since the days after the September flooding caused by the remnants of Hurricane Irene and Tropical Storm Lee.

BAE shuttered its Main Street facility in Johnson City after some 16 million gallons of water flooded the plant after the remainders of Hurricane Irene and Tropical Storm Lee slammed the area. In October, the company announced it would not return to Johnson City and was looking for a new home — either elsewhere in the Southern Tier or within existing BAE space around the country. However, in November, the company announced it planned to stay in the Southern Tier, keeping 1,350 jobs here, and would continue to look for a suitable location in the region.

BAE received a $40 million state incentive package including job- and investment-related tax credits over a five-year period to assist with its relocation effort.

“It was certainly useful to be here,” Richard Ashooh, BAE Systems strategy director, says of the company’s post-flooding relocation to the Huron Campus. Company officials knew BAE would have to adjust with any new facility, but being at the Huron Campus provided the company with a good learning experience.

“At the end of the day, you’re looking for a site that meets the unique needs of the business,” and is cost competitive, Ashooh says. BAE searched within a 35-mile radius of its former location, trying to keep any move within a reasonable commuting distance for the approximately 1,350 people it employs in the Southern Tier.

The odds of BAE finding a site large enough to replace the 600,000 square feet under one roof it had on Main Street in Johnson City were slim, he says, but the Huron Campus stood out from among other possible sites because it does offer a lot of space and flexibility.

One thing the company made sure to do was assess the risk of flooding on the campus, Ashooh says. “We absolutely consulted the flood maps,” he notes. The fact that BAE was able to locate on the campus four days after the flooding was also a good indicator the campus is located well out of the flood zone.

BAE Systems will lease 400,000 square feet from Huron Real Estate Assoc., LLC with options to renew and add space, Ashooh says. In the coming weeks, BAE will map out its exact footprint at the campus as the company now has access to some different buildings.

Once that is settled, BAE can get back to business as normal, he says. “Now the effort we spend will be on getting new business.”

BAE’s Southern Tier operations produce electronic controls for military and commercial aircraft and hybrid electric propulsion systems for transit buses. Since the flooding, BAE has operated from temporary space on the Huron Campus in Endicott.