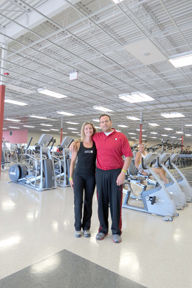 CAMILLUS  —  Aspen Athletic Clubs’ pursuit of a location in Fairmount has been a marathon, not a sprint.

“We’ve actually been looking at the Fairmount–Camillus area since back before our Liverpool location opened,” says Nichole Polos, who owns and manages Aspen with her husband, Brent Polos. “2006 is when we opened the Liverpool location.”

Aspen finished its long race toward Fairmount on Sept. 17, when it opened a club at 3504 W. Genesee St. (town of Camillus). The 30,000-square-foot club is Aspen’s largest.

It contains 70 pieces of cardiovascular equipment, three 12-piece lines of resistance-training machines, a 17-piece line of plate-loaded weight machines, and free weights totaling 10,000 pounds. The new club also features a functional training room, which is a 30-yard-long, 2,500-square-foot room with NFL-grade turf that gives athletes a chance to work on attributes like agility.

The Fairmount location is Aspen’s fourth club. It joins a 6,000-square-foot downtown Syracuse club at 125 E. Jefferson St. that opened earlier this year and a 28,500-square-foot Cicero club at 5863 E. Circle Drive doubling as the company’s headquarters. The Cicero club, Aspen’s first, has been at its current location since 2008, when it moved from space leased at nearby Driver’s Village.

And, it joins the location Aspen calls its Liverpool club at 8015 Oswego Road — that club, which stands at just under 20,000 square feet, has a Liverpool mailing address but is technically situated in the town of Clay.

Before space opened at 3504 W. Genesee St. in Fairmount, Aspen struggled to find a spot in the area that met its square footage and parking needs, Nichole Polos says.

“Those are the two biggest issues for our suburban clubs,” she says. “The Fairmount area, as far as commercial real estate goes, is very limited. A couple places had the parking but didn’t have the square footage.”

Aspen’s interest in the space at 3504 W. Genesee St. stretches back for years. It looked at the location before it opened its Liverpool club six years ago, but an OfficeMax moved into the building, Polos says. That OfficeMax was eventually replaced in the space by a MaineSource Food & Party Warehouse.

Then in November 2011, MaineSource announced it would close its Fairmount store. Aspen didn’t wait for the location to become vacant before inquiring about it, Polos says.

“The day they announced they were closing the store, we contacted the real-estate person at Maines,” she says. “It’s on a highly traveled road with lots of shopping, restaurants, and grocery stores nearby. The area had a Bally Total Fitness a few years ago
but that closed down. Nothing replaced it.”

Aspen leased the location from Cicero–based Rocklyn Cos., according to Polos. Next it spent about $500,000 renovating the building and an additional $550,000 filling it with fitness equipment.

Aspen also had to hire new employees to staff the location. The Fairmount club will have nearly 50 employees, with about 12 being full time, she says. That’s on par with the company’s other three suburban locations. Its downtown club has 25 employees.

Companywide, Aspen has about 170 total employees. About 25 of them are full time. Polos did not share its total number of club members.

Aspen competes with other fitness offerings like the YMCA, Gold’s Gym, and Planet Fitness in a variety of ways, according to Polos. Many members appreciate that Aspen is a local company, rather than being a franchise or large organization headed elsewhere, she says. And it has a range of offerings, from childcare to aerobics. Also, its rates are lower than a number of its competitors, she says.

Aspen’s current membership rates range between $9 a month and $19.99 per month. It charges a rate-guarantee fee every July of $29.

The Fairmount club’s other features include a Kid’s Korner that provides child care for parents while they work out, as well as a 16-bike group cycling room and a 2,500-square-foot aerobic room for Yoga and Zumba groups. It also has five tanning rooms and a cinema cardio room with equipment in front of a 120-inch screen playing classic movies.

“Most people aren’t going to do cardio the entire length of a movie,” Polos says. “But they’re classic movies where you could lose yourself for 20, 30, 40 minutes.”

A unique touch at the Fairmount location is J&C Sports Nutrition, a juice and snack bar that offers supplements, protein bars, smoothies, and energy drinks. J&C is a separate company leasing about 500 square feet of space within the Fairmount club. Polos’ father, Jim Frezza, owns J&C.

J&C had operated at Syracuse’s regional market and made weekly visits to Aspen’s other two suburban locations, Frezza says. Opening a permanent space in the Fairmount club made sense, he adds.