Armory Square hotel project gets off the ground at last 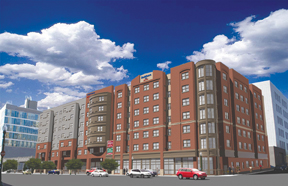 RHS Holdings, LLC announced the project in 2008, but it was delayed by financing issues in the wake of the economic downturn and financial crisis of recent years. Financing for the $30 million project closed Feb. 24 with M&T Bank.

“It was such a good idea,” RHS’ Richard Sykes says. “We felt very confident it was the right thing to do. We’re excited to finally start building.”

The 180-room, 160,000-square-foot building will house a combined Marriott Courtyard and Residence Inn. It’s the first new construction on such a combined hotel in the Northeast, Sykes says.

Other combined Courtyard-Residence Inn hotels exist, but they are renovation projects or upgrades of previous buildings, he says.

In addition to financing from M&T, the project is in line for a $2 million loan from the Empire State Development Corp., a $500,000 grant from the city of Syracuse, waivers for sales tax on construction materials and the mortgage tax, and a payment-in-lieu-of-taxes agreement.

The hotel will create 125 full- and part-time jobs once complete, in addition to 200 jobs during construction.

The hotel is expected to open in May 2013. RHS expects the Marriott project to house an annual total of more than 90,000 guests, who are estimated to spend more than $500 a day each. The project is forecast to generate about $2.1 million in sales -tax revenue every year and more than $400,000 in annual hotel-tax revenue.

The hotel will target both business travelers and extended-stay guests, Sykes says.

The building will be located at 300 W. Fayette St., the site of an existing parking lot adjacent to the building that houses the headquarters of engineering firm O’Brien & Gere.

LeChase Construction, which is based in Rochester but has a Syracuse office, is the general contractor for the project.